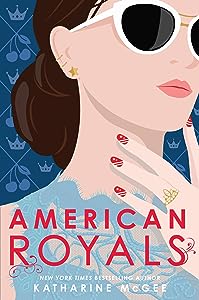 What if, instead of being a democratic republic, the United States was a monarchy? What if George Washington, instead of being elected president, had accepted a position of kingship? And what if today, 244 years after our independence, descendants of that original King George still ruled the United States? This is the premise set forth in American Royals by Katherine McGee.

Princess Beatrice is the oldest child of King George IV and Queen Adelaide. At 21 years of age, Beatrice is first in line of succession. Thanks to a recent change in laws, she will become the first ever queen of the United States. Her parents feel that she is ready to marry, thus ensuring the line of succession. She is presented with a short list of suitable candidates at the annual Queen’s Ball. She must choose a queen’s consort from amongst this group. Lord Theodore (Teddy) Eaton, son of the Duke of Boston, seems a perfect fit for the job. Beatrice ultimately falls in love, but with someone far less suitable. What’s a future queen to do?

Beatrice’s siblings, twins Princess Samantha and Prince Jefferson, have lived carefree lives. Not being in direct line of succession they live on the wild side. Where Beatrice doesn’t even smile until she’s thought of the possible consequences, the twins are the darlings of the tabloids.

Princess Samantha finds herself falling in love with Teddy, Beatrice’s intended while Prince Jefferson is being pursued by two girls – Daphne, who he’d already dumped (she won’t give up her dream of being queen) and Nina, his sister’s best friend and a girl who is treated like an extended family member; one a daughter of nobility, the other a commoner.

An incisive look at the private lives of a generic royal family, American Royals puts a familiar (American) spin on the story. I found it fascinating to see how these three young people handle their destinies while living under public scrutiny. Just as the reader starts to feel complacent about the outcome of the story, wham! There’s a wonderful twist that sets you up for a sequel.

With engaging characters, easily identifiable locations, and a great twist to American history, I found it difficult to put this book down.